Our Children Are Fighting Climate Change; Are We?

Our Children Are Fighting Climate Change; Are We? 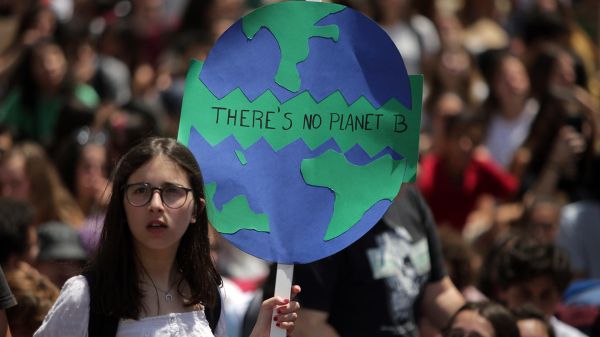 Climate change is a hot button issue in society with debates going back and forth on what the cause is and how to slow it down. Scientists have been providing evidence and data going back decades that supports the trend we are seeing with global climate change, yet we as a society have only just emerged into acceptance.  Do we understand how it impacts us, even when we don’t see the dramatic devastation? In the United States, we don’t always see the impact of climate change like other countries do, or even other areas of our own country. California has seen more than 7,000 fires since December of 2019, and we can’t deny the connection to changes in climate. The fires currently raging and endangering species in Australia are also a symptom of this, as are the flash floods they are experiencing. Are these invisible side effects to those who aren’t there? Are they unintended consequences of decades of inaction against climate change? Do we not feel it here in the U.S. because it's not right in front of our faces? Out of sight, out of mind? What other effects are present that we aren’t aware of because we don’t see them?

There are various health effects at play wth climate change, particularly with respiratory health due to a steady decline in air quality and a continuous increase in pollution. Sea-levels are rising and the life living in the oceans and seas are affected by both the level change and the temperature change associated with it, but we don’t always see those effects until it’s too late. With fires and floods come drought, leaving our agricultural efforts to struggle as well. Damaged or no crops can lead to food insecurity and food deserts, which can lead to climate refugees leaving areas of destruction for others that have not yet been damaged by climate change. But what happens when so many people leave those areas and come to those that have the resources to sustain a population? Eventually, that area can no longer support the carrying capacity it’s been landed with and we continue in a loop of scarcity and devastation of natural resources that leaves us without the ability to sustain the human race.

As an individual, it can be daunting looking at the challenges before us when dealing with climate change. It can feel like we just aren’t doing enough, much like climate activist Ally Bubb describes she felt in her interview with West Bend High School Senior, Samantha Dietel, the editor in chief of the West Bend Current student newspaper. Bubb now volunteers with the nonprofit, the Climate Reality Project, and recently led a presentation called “24 Hours of Reality: Truth in Action” at the Democratic Party of Washington County office. We can feel helpless as individuals in the face of climate change, but the only way to enact real systemic change is for individuals to start where they are and do something, anything, to support their cause. I highly encourage you to read more about the Climate Reality Project (which is not limited to the midwest and has chapters nationwide!) and Ally Bubb’s work and inspiration here in Samantha’s article!

How can we enact change as individuals in our communities without feeling like it’s not enough? Project Drawdown offers a comprehensive guide to small changes we can make as individuals, but in order for that to happen on a bigger scale, we need to educate people on how they can make changes in a sustainable way. Education is a huge part of our battle against climate change and making sure that we are giving the next generation the tools to fight it is imperative to our survival as a species. Educating our communities, members of all ages and walks of life, bringing in individuals to fight for a cause with others will help lead towards the systemic change we desire. Systems can’t change without the people involved and invested in them also changing, so I think it’s more appropriate to say that the individual isn’t the position that can’t do enough, it’s the most powerful piece of the puzzle in many ways. If individuals don’t take action first, we will never see action on a bigger scale.

Some feel that we are leaving the future generations of our children with a battle they haven’t started or wanted to participate in, that it’s been forged for them in the past and shouldn’t be what they are left with for their futures. As right as they may be, the reality is that unfortunately, they are left with this battle started by their parents, grandparents, and great-grandparents, and they need to be able to learn how to fight it and be successful. Youth impact is a huge component right now in our fight against climate change, and it certainly should be, as this is the planet that older generations are leaving behind for them. This is their reality, that they had no hand in making, but hopefully, they can help shape it moving forward. My son is a month old right now, and I worry every day about the world we are leaving for him. I ask myself how I can best prepare him to be an active participant in this battle against climate change, and what tools he will need in order to thrive in the world he’s emerged into so I can prepare him the best that I can. The children are our future, no matter the outcome, and they already have a pretty good understanding of what needs to happen in order for progress to be made in decreasing the impact of climate change on their world. Greta Thunberg has paved the way in the mainstream for youth fighting against climate change, but many others have already made waves in their communities as well, such as Isra Hirsi, Autumn Peltier, Bruno Rodriguez, Helena Gualinga, Mari Copeny, and many others that don’t make the headlines. They are doing amazing work, and their efforts are instrumental in changing the direction of this climate crisis in society; society just needs to listen.

I leave you all with a couple of very important questions. How are we leaving this planet for our children and future generations? What kind of future are we creating for them? And most importantly, our children are fighting Climate Change; are we?