Can You Imagine Snow-Covered Bees? Things Happen Just Because They Can.

Can You Imagine Snow-Covered Bees? Things Happen Just Because They Can. 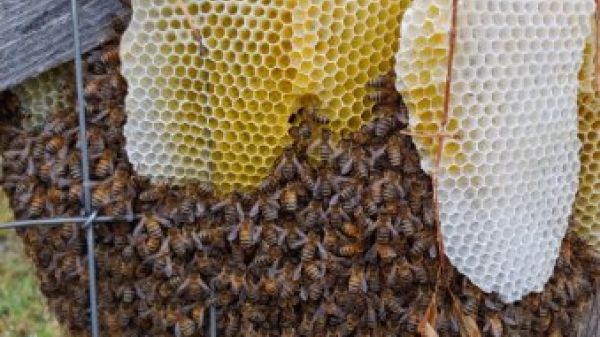 On a remote country dirt road up the mountain near my house a surprising event took place which baffled both me and my walking partner Allison. Winter comes early where I live, and temperatures can drop to -30 Celsius or -22 Fahrenheit. Imagine our surprise one morning when Allison spotted a swarm of honeybees clustered on the post of a wooden fence. I understand that bees can swarm even in the fall but doing it in winter is asking for trouble. Heavy snow fall was in the forecast that same night! Honeybees are not native to our area because we are too far north, but I am told that they have adapted because they can produce heat with their bodies and keep warm in their hives during winter. Of course, if the freezing weather drops too low and lasts too long it becomes a disaster for them. You would think that they would know not too swarm in winter. They might have been confused by the unusually long Indian summer we had this year. Perhaps they were sick or maybe something else was happening in the environment that our limited senses could not pick up. Let me share with you what snow-covered bees had to teach us about Nature, the way things happen just because they can and what this has to do with educating young children to the environment.

As human beings we take comfort in thinking that Nature knows what it is doing; that animals know how to survive, birds know how to fly, and trees know how to grow. When something unusual happens, we worry about the safety of our environment and ultimately about our integrity and survival. In fact, in Nature and her environments things happen just because they can! Things happen because all the right element are present to produce a phenomenon. Everything around us is constantly changing sometimes slowly and sometimes radically. A seed grows into a plant, creates a flower, a seed and then dies. Animals are born, mature, grow old and die leaving behind a new generation of their species. Mountains are created by the shifting crust of the earth, erode and disappear. It is a recurring process on earth and across the galaxies. It applies to everything and everyone. Valera, Thomson and Rausch (1991: 196)[1] wrote that in the evolutionary process ʺ the putting together of parts and items in complicated arrays, not because they fulfill some ideal design but simply because they are possibleʺ is the rule of thumb. Things happen just because they can and not because they are optimal. As Deleuze and Guattari (1980)[2], they further argue that organisms and environments are interconnected and entertain a dialogic rapport acting on one another. A dialogic rapport means that everyone and everything acts on and is being acted upon by everyone and everything. Humans, if they stop and think about it, sense that everything is interconnected but most fail to appreciate the motion, the direction, the speed, the time and space of the transformational process and their diffusions of energies. They cannot anticipate or predict change, transformation and evolution and so, they do not live accordingly and take what they have for granted. Many also take what they want disrespecting or ignoring the dialogic principle.

Things happen in environments just because they can, and they happen all the time. Things happen to environments, to humans, to animals, to vegetations, to insects, bacteria and viruses. Ronald Bogue (2009: 45)[3] explains that a transformation, an evolution or a phenomenon occurs not because it is good or bad.  It occurs just because it can, because the right elements are present. Add elements to biophysical environments, to human biosocial contexts or even to cosmic settings and things can change, transform and evolve. They can reorganize and offer new realities. Everything and everyone are products of their environments as well as producers of products in those same environments. Now, humans have little control over things that come from the cosmos or the biosphere itself, but they can seek control over what they produce. Individual humans cannot rap their minds around the permutation of all the products and the producers in their environment and the combined effects of motion, direction, speed, time and space. Some can recognize that the transformational process is the underlining principle of reality.

Bees should know not to swarm in winter and snow-covered bees would surely meet their doom. They demonstrate that something happened in their environment that made them behave strangely. I am not a bee or a climate expert, but an exceedingly long and exceptionally warm Indian summer linked to climate changes which in turn are linked to human activities and products are probably responsible for the behaviour. Reality is engaged in its transformational process and does not care to save anything may it be bees or humans. Products are introduced into environments, the biosphere and the cosmos, permutations take place, reality transforms itself and impact producers. That is the way things are.

The dialogic rapport between everyone and everything can have negative or positive impacts on the well being and safety of the biosphere and all that it contains. Many authors understand the dialogic rapport as a process of ʺ connaturality ʺ [4] that creates among humans, different communities of thought and humanities that are branded with specific qualities.  The same applies to the fauna and flora and to everything in the biosphere. There are communities of realities and areas of transformational process. ʺ Connaturality ʺ is a process where one acts on others and lets others act on the one. It must take place for each one of us with our immediate environment, the ecosystems nearby and Nature that evolves within them. ʺ Connaturality ʺ is not reserved just for our human products like cities, culture, socioeconomic structures, events, history and languages. Exercising ʺ connaturality ʺ and respecting the dialogic principle makes us more complete as human beings and more worthy as earthlings.

A lot of effort is being put into creating new communities of thought and new humanities which are respectful of environments and ecosystems and so, elements are being added in our biosocial contexts which in turn have effects on our biophysical environments. The transformational process is underway but real hope lies with early childhood education and the new generations to come. As young children mesh with their environment and discover nature, the transformational process and the dialogic principle are embossed in their nature changing their views for ever. Elements about reality are being added in the space created when the subjectivity of the children encounters the subjectivity of the environment. There, everything becomes possible! As they become adults, they will pass this knowledge onto their children and grandchildren.

My walking partner Allison and I went back on the dirt road to check on the swarm of bees. The snow and the cold were coming. We searched for a while but could not find them. We examined trees nearby thinking they might have moved to another location. We walked along the wooden fence wondering what might have happened. Then, to our surprise bits of honeycomb wax were spotted on a post and on the ground. I thought they had been destroyed but Allison, sure of herself, declared: They were harvested! The honeycombs had been cut off. A beekeeper had spotted the swarm, gathered the bees and their queen as well as all the food they had collected in their combs and offered them a new home.