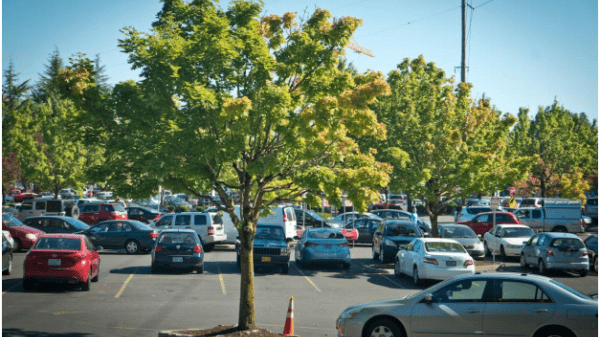 Portlanders are serious about trees. As a newcomer to the city, I was surprised to find trees growing in the most unlikely places – in medians, parking lots, and even on rooftops. When it rained, I took cover under a beautiful canopy of Wingnut Trees in the Irvington neighborhood. When record-breaking heat wilted the city, I enjoyed the shade of a Yellow Poplar in the park. When I went shopping, something in the parking lot stopped me dead in my tracks. Head craned, I spent a full minute outside a local grocery store bemused by what I was seeing. There were dozens of trees in the parking lot. I’d later find out that nearly all of Portland’s parking lots are like this. Trees (the antidote to a concrete jungle) and parking lots (the bane of a walkable city) were somehow coexisting peacefully in Portland. I had to find out how the city pulled it off.

Having spent most of my life in Midwestern cities, I was having a hard time comprehending why any cost-conscious business owner would give up such a valuable resource – parking – for green space. After some research I realized, many business owners don’t have a choice. Portland’s love affair with Maple, Elms, and Oaks isn’t as clean-cut as I thought.

Portland has tough urban forestry regulation. Red tape is protecting the city’s trees – literally. Construction sites are filled with red-wrapped trees warning workers to steer clear. The government’s Tree and Landscaping Manual outlines requirements for parking lot greenery in no uncertain terms. Parking lots require one large tree (or six shrubs) for every four parking spots (Portland Bureau of Development Services, 2017). That’s a lot of green for a little parking lot. The city argues that the benefits of this regulation outweigh any loss, though not everyone agrees.

In 2015, a controversial rule went into effect, taking the fight for trees right into the yards of residents. Some homeowners were not pleased to hear they could no longer chop down a tree on their own property without the city’s permission. Taking an ax to your tree without a permit can now set you back $1,000 (Portland Bureau of Development Services, 2017).

So what are the benefits? Is Portland pushing for more green simply because trees look nice? There’s actually a lot more to the story. A tree in an urban environment has more than just aesthetic value. Planting a tree is a step toward rebuilding an ecosystem – complete with frogs, hawks, owls, butterflies, and bumblebees. The urban heat island effect, an unnatural warming in metropolitan areas, can be tempered by a strong tree canopy. Trees help keep pollution out of our waterways, filtering stormwater runoff before it can cause any harm. Thirsty trees can actually keep runoff from overwhelming water treatment plants, ultimately saving the city and taxpayers money. Trees can improve air quality, muffle noise pollution, and fight global warming. Plus, a single mature tree can boost your property value by 10% (U.S. Forest Service, 2016). That’s a win for you and the city.

Long before Stumptown was a beloved coffee chain, it was an insult. In the mid-18th century, Portland had a boom in growth and the trees cut for housing were left as stumps stretching on for miles. When the ground was muddy, people apparently jumped from stump to stump to get places (The Oregonian, 2016).

Now Portland is one of the best cities for urban forests and plans to take it even further. The city plans to grow the already-impressive tree canopy from 30% to 35% - that’s thousands upon thousands of new trees - in the next two decades, a difficult feat stressed even further by the ballooning population. New development is usually the enemy of green space. Though, I wouldn’t put it past Portlanders to solve this problem. They combined parking lots and trees effortlessly – I’m willing to bet they’ll find a way to build a denser, greener city, even if it means more red tape.