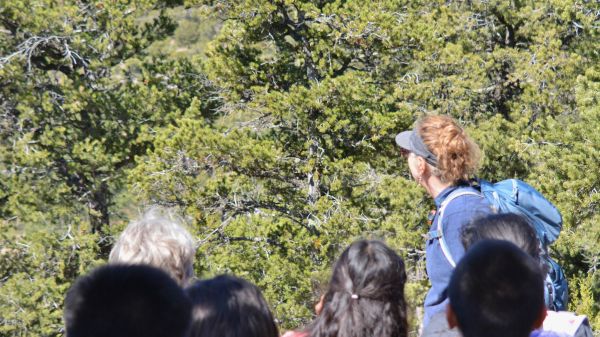 The Sandia Mountain Natural History Center (SMNHC) is a 128 acre property of primarily pinyon-juniper forest at 7,000 feet elevation, adjacent to Cibola National Forest and a short drive from Albuquerque, New Mexico.  In a unique arrangement, the land is owned by Albuquerque Public Schools (APS), the 34th largest school district in the country, and jointly operated by the New Mexico Museum of Natural History and Science through the State of New Mexico.

With great foresight, APS purchased the property back in 1953.  In 1966, P.E. teacher John Cox received a federal grant to run an outdoor education program on it.  Cox was a seasonal park ranger at the Grand Canyon, and he wanted to give local New Mexico kids an educational experience in nature.  April 27th, 1967 marked the first full day of programs.

In the early 1990’s, an APS budget crisis threatened the closure of the center.  It was saved by an agreement in 1993 with the State of New Mexico for APS to retain ownership of the property and run it in partnership with the New Mexico Museum of Natural History and Science.  The SMNHC mission expanded to include serving students throughout New Mexico, and its state-employed educators have been travelling to state parks and other natural areas statewide to lead programs ever since.  2018 will mark the 25th anniversary of this ongoing, successful partnership.

SMNHC educators have taught over 500,000 students, primarily 5th graders, about the mountain ecosystem and how everything in it is significant and inter-connected.  The students, many of whom have spent little or no time in the mountains prior to this experience, go on a 1 ½  to 2 mile hike and are immersed in hands-on activities, scientific research, learning about wildlife, and constant discovery.  All 5th graders in APS take part (about 8,000 per year), as do other nearby school districts, private, and charter schools.  Over 1 million miles have been hiked by students on SMNHC trails since 1967!

This year on April 27th, top administrators from the State of New Mexico Department of Cultural Affairs and APS, along with current and former SMNHC staff and volunteers, gathered to commemorate the significance of these 50 years of environmental education in New Mexico, while students from Janet Kahn School of Integrated Arts participated in the program (the show must go on!).  It is vitally important that young people get a direct and impactful experience in nature to inspire them to care about and make lifelong decisions with the ecosystem in mind.  The Sandia Mountain Natural History Center has been, and will continue to be, a driving force in environmental education in New Mexico, for 50 years and beyond.

Go to https://sites.google.com/a/aps.edu/smnhc/about-the-smnhc/history-of-the-center for a complete history of the SMNHC, researched and written by volunteer educator Michael Cox.

Browse the rest of the site for information on current programs and activities of the SMNHC, wildlife camera photos, how to visit, and more.