Everything About Early Childhood and Environmental Education Has Yet to be Discovered. A Little Red Mushroom's Tale!

Everything About Early Childhood and Environmental Education Has Yet to be Discovered. A Little Red Mushroom's Tale! 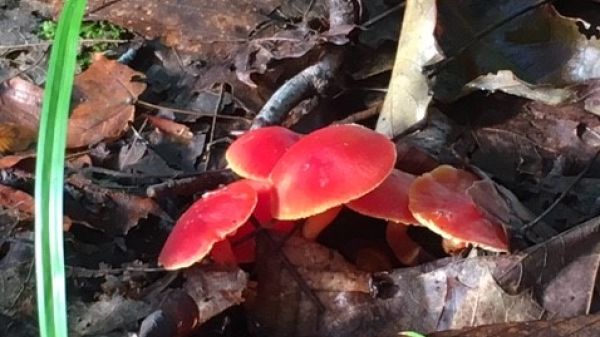 Everything About Early Childhood And Environmental Education Has Yet to be Discovered.

Years ago, in the modern world, babies and toddlers were expected to eat, sleep, play, be healthy and happy. They grew following their impulsions guided by their sensory perceptions and the rhythms of situations, events and accidents that would happen in their environment. Their education was informal and global, and their educational setting, if all was well, was homey. They would grow freely and had the time to balance their circadian rhythms (blood pressure, temperature, hormone production) and develop the synapses required for perception and communication, until they reached a natural balance and composure around five years of age. They had the time to live their early childhood years without too much worry or care until adults would turn their focus on them with the purpose of formal education and schooling. In the late fifties and early sixties—my generation—we spent all of our days as young children outside, come rain or shine, playing by the creek looking for crayfish, climbing apple trees, walking in muddy ditches trying to catch bullfrogs, picking wild flowers or dreaming of building log cabins in the small patch of woods left standing in the middle of the corn field. When the time came to go to school, all the five- and six-year-olds were gathered for a first general assessment. I remember the teacher looking at us with empathy, one after the other, and declaring: “Now what are we going to do with you?”

In those times, the search for talent or special abilities was the main preoccupation as the rest of the children were simply expected to go through school, learn to read and write and eventually find a place in society. Young children had time to explore their senses, compose their thoughts, manipulate things and experiment. They were free of adult supervision when playing outside and had the time and space to develop the intimacy of their thoughts, discover their temperament and their budding personality. They had the privilege to create their “concrete mind”[1]; establish their sensory perceptions, develop their motor abilities, get a hold of their feelings and emotions, and create their own sense of the real world. They had the right to be individuals and were not expected to be like everybody else. They were told to hold their tongues and not to speak their mind, so they were not bothered with what others could think of them. Humility and simplicity were valued so they were not judged for their appearance, clothing or style. Teachers were always on the lookout for rising talent, emerging geniuses, strategic minds or angelic dispositions, especially when it would emerge from decaying socioeconomic conditions. In those times, the resilience factor that certain individuals would experience in difficult social conditions was a precious sign of intelligence and a cue for teachers to try and bring those individuals to the edge of social contribution.

Then came science and everything changed for early childhood education. Literacy was invented for young children to prepare for alphabetization. Developmental and educational objectives were set, and priority was given to achieve success in school and in society. The modern world needed hordes of individuals who could tend to the wheels of bureaucracy and technocracy so that the leaders of neoliberalism could develop markets for their personal profit and the profit of modern societies. Education to society became the ultimate preoccupation. For some modern collectivities, education to life within a family, a community and a specific environment as beings having a life to live, and education to ecosystems and the biosphere where biological beings were considered secondary or even obsolete. Neoliberalism as a socioeconomic system is going global and the twenty-first century is bringing about the post-modern society in which we are living now. Well-to-do families are bringing up their babies and toddlers in artificial and virtual environments marked by “opsistiation”[2] meaning that they educated them with fast-moving images and sounds with different types of screens. Alphabetization under this thrust is reaching warp speed, leaving many individuals behind. Perhaps it is creating elite groups of individuals enclaved in artificial worlds or perhaps it is even shooting some individuals right out of this world!

Education of the concrete mind, literacy, alphabetization and opsistiation are systems we devise to make sense of the outside world and to try and figure out how to act on it and how it acts on us. Alphabetization changed dramatically the way we did things in the past century. Literacy for young children, over the past few decades, has changed their human condition. All the while education of the concrete mind was and is looked down upon as if it belonged to the old world. As humanities follow the cycle of life-death-life through generations, some things are lost, and some things are gained. Humanities are collective mindsets that mutate with every passing generation through the centuries. If collective mindsets take specific directions, it does not mean that they are the optimal ones. It just means that they have those options due to force of circumstances. That is why great societies fall and disappear, and new ones rise-up. The old ways of educating young children through the development of the concrete mind are fast being forgotten. The new ways through literacy, alphabetization and opsistiation have imposed themselves. And yes, on the horizon, the future of early childhood education is rising through technologies of quantic virtual realities.

This fall, I was worried about leaves covering the plush green lawn around my house as I did not have the tools or the time to pick them up. The same thing happened last year so leaves and decaying matter just piled up. I was struggling with the idea that the plush green lawn had to be protected from nature until one morning as I walked out my door, I was amazed by a carpet of beautiful small bright red mushrooms literally growing in front of my eyes through the dead leaves. Their energy was palpable. Their colour: so vibrant. The green lawns of our educational systems and our socioeconomic ambitions inevitably will be covered by the falling leaves of changing collective mindsets through generations. We might be amazed at what will come through the education of the concrete mind, literacy, alphabetization and opsistiation, if we can allow them to pile up instead of thinking that one must replace the other. What we can remember imbedded in written and oral cultures across time and across the world might reveal rich layers of knowledge about environmental education and prospering humanities meshed with ecosystems and the biosphere. Acknowledging our biological and cosmic roots is intrinsically tied to our physical and mental health, to the quality of our human nature and inevitably to educating young children.

Everything about early childhood education has yet to be discovered in the postmodern world! It goes far beyond holding a pencil, turning pages, recognizing symbols, solving problems, paying attention, following directions, walking, running, climbing, talking and making friends. Developing the concrete mind is all about developing sensory perceptions to:

1) allow the occurrence of their combined frequency when needed for survival (think about when you sense a storm coming);

2) to receive the information for living, carried by the different wave lengths of caloric, light, sound, molecular components and space density in the atmosphere tuned into the outside reality (think about when you pick up the scent of roses in the air); and

3) to envision the different layers of representation of knowledge and realities that allow us to project possible directions for action (think about when you have three possible courses of action and you can’t make up your mind).

Environmental education starts with the education of the human body and mind, and it starts in early childhood. I once stood in front of a forest with my brother Ray who is far more educated in these matters than I. We stood in silence and soon he pointed to my left and whispered: “Do you see the disturbance in the air just below the big tree?” I did not. “There is a deer eating there,” he added. Later on, he said: “Can you smell that?” as his nose was going up and down as if following a wave in the air as he was collecting traces of some wild odour. I did not. “There is a bear about a mile up ahead.” We continued our walk towards the forest, and he asked: “If you saw something moving so fast you had the impression it was a ghost; would you believe it was real?” I don’t think I have ever experienced that! His friends had and firmly confirmed that the mountain lion was present in their environment. My brother is actively looking for it to this day! As we talked about the environment, he asked if I had ever felt the uneasy feeling of being in an immense wide-open space all alone. I might have sensed the possibility of that situation in my life, but most certainly backed away from experiencing it. He explained that building a small shelter in a wide-open space helps us cope with the disturbing wave lengths of sounds, lights, odours, matter in the air, density and pressure of the atmosphere produced by nature’s weather systems within her ecosystems. What is disturbing is the vast amount of information wide-open spaces throw at us. A shelter helps us manage it. Ever wonder why setting your eyes on a calm sunset on the ocean or a deep snowy valley makes you feel good? Those sites are composed of long wave lengths of caloric, light, sound, molecular components and space density in the atmosphere.