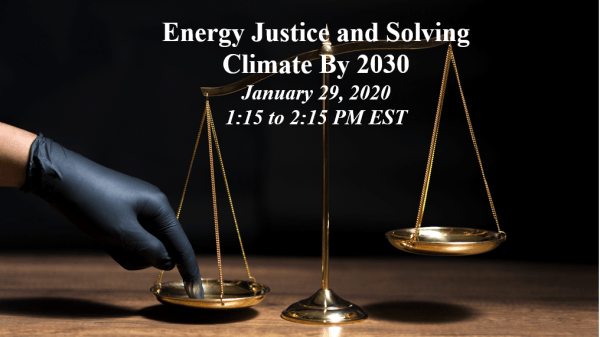 The Security an Sustainability Forum

We live today in an uneven world, defined significantly by energy injustice. Moving from here to the Paris climate goals will require a ten-year, global transition towards clean energy. How can we create a just energy system in the transition?

Join the  Security and Sustainability Forum and Bard College in a sixty-minute session about how innovative city and state policy will be critical to ensure justice in the economic transformation needed to solve the energy side of climate change by 2030. Panelists are entrepreneur and energy democracy leader Michael Dorsey and Eban Goodstein, Director of the Center for Environmental Policy at Bard College.

Michael will explore how both energy and income inequality could be impacted, positively and negatively, as renewable energy infrastructure scales. He will focus on how we can rewire the world with clean energy to help alleviate injustice.

Eban will discuss a new Bard-led program, Solve Climate by 2030. The program is supporting a nationwide series of campus and community Power Dialogs to engage 100,000 students in critical conversations about power as in “clean energy”, but also about power as in “engaged civic action”.

The webinar is for educators, students, local leaders, state policy officials and citizens

Michael Dorsey is a leading solar energy developer whose work focuses on energy justice. In 1997, in Glasgow, Scotland, Dorsey was bestowed Rotary International’s highest honor, ​The Paul Harris Medal for Distinguished Service to Humanity. Dr. Dorsey is a “Full member” of the Club of Rome and in 2013 the National Journal​ named him one of 200 US “energy and environment expert insiders”.

Eban Goodstein, Director of the Center for Environmental Policy at Bard College, is the author of Economics and the Environment now in its eighth edition; Fighting for Love in the Century of Extinction: How Passion and Politics Can Stop Global Warming; and The Trade-off Myth: Fact and Fiction about Jobs and the Environment.

His research has been featured in The New York Times, Scientific American, Time, Chemical and Engineering News, The Economist, USA Today, and The Chronicle of Higher Education.